Adecco, Manpower and Randstad the largest staffing firms in the world

21-12-2015 Redactie vacatures.nl
Since it's merger between Adia and Ecco in 1996, Adecco has been allowed to call itself the largest staffing firm worldwide in terms of revenues. While Manpower this year took the number two position from Randstad. Finds research by Vacatures.nl which compared the end of year revenue figures of the largest staffing players in the world. The top 20 has seen a few changes in position, yet continues to be held by the same 20 agencies as the year previous.


Top 20
The three largest staffing firms in the world (Adecco, Manpower, Randstad) are well entrenched at the top. Together their total revenue is equivalent to the total of the following 17 agencies in the top 20. Allegis and Hays Group complete the top 5. Japanese Temp Holdings is the biggest climber in the top 20, moving from position 20 to 13. This growth is in large part thanks to the takeover of, among others, CareerRise and Panasonic Excell Staff. The US Volt Workforce Solutions swapped with Temp Holdings, having declined from 13 to 20. With as explanation for the steep decline, the loss of a number of large clients. And the consequent decline in revenue reflecting a new direction in which less profitable customers are jettisoned, which while resulting in lower revenues, has seen the operating profit of the company increase. 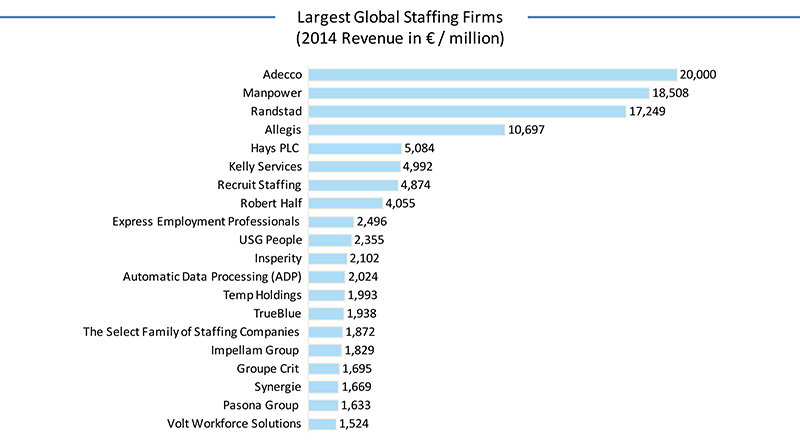 Growth per agency
Randstad, while handing in its number two spot, saw its revenue grow by 4.1%. Manpower managed to take second spot from the Dutch agency, due to a favourable exchange rate for the dollar1. As expected, in term of growth and decline, Volt Workforce Solutions (-15.2%) and Temp Holdings (39.9%) were respectively the biggest losers and winners in the past year. Other big performers include TrueBlue (30.35%) and ADP (15.1%). Besides Volt, Hays is the only agency to see a decrease: down 0.5% and staying just ahead of Kelly Services to stay in the top five. 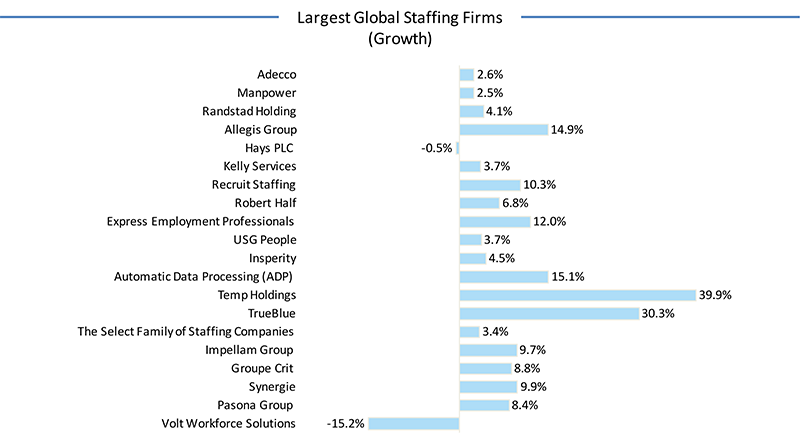 Regional placement
Just like the year previous the US is far out ahead in terms of the revenue from its 10 home agencies in the top 20, accounting for 46% of total revenue. The Netherlands and Switzerland, both relatively small countries, offer a considerable slice of the staffing pie: mainly thanks to Randstad (Netherlands) and Adecco (Switzerland), they each have an 18% slice. 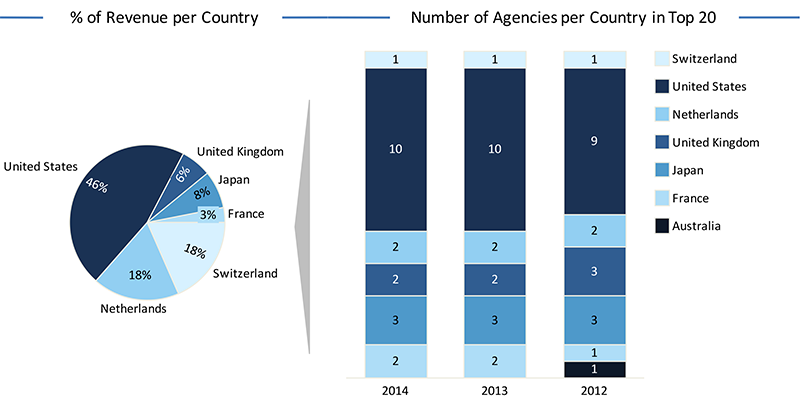 Growth of the top 5 and top 20
In recent years the top 20 has enjoyed stronger growth than the top 5. Thereby the positions have slowly but surely been changing: in 2012 67% of total turnover was generated by the top 5, in 2014 this was but 65%. The bear market in the staffing industry is clearly visible: the total revenue of the top 20 increased by 6% in 2014, where a year earlier growth remained pretty much flat.

Figures released by CIETT show that the staffing industry in 2013 generated revenues of 415 billion Euro. Based upon the projection of 6% growth, this would mean total revenue of 440 billion euro in 2014. It follows that around 16% of the revenue growth is thanks to the top five largest agencies.